In short the answer to this question is simple. Because dogs are intelligent creatures who want to learn, and in doing so they can become essential in our lives and the lives of others. Communication between humans and dogs is no longer a one-way street. With understanding comes trust, which builds confidence and results in the happy union of our two species.

By knowing how dogs process information from the world around them, you can provide the right kind of dog training.  It's no use just picking a training method and running with it. You need to understand a dogs psychology.  Essentially you want to be able to manipulate or 'hack' the behaviours of the dog.

The main process that dogs will use to learn throughout their experience with humans is called conditioning. Scientists such as Ivan Pavlov have performed many experiments using behavioural conditioning. These methods can be divided up into two main categories;

For example, when a dog becomes overly excited at the sound of the postman dropping off the mail, he barks. However, if you were to start working from home and receiving daily postal deliveries, the dog becomes used to his presence and this lessons the excitement over time.

There is no reward or punishment associated with this stimulus; the dog is neither excited nor distressed.

Sensitisation occurs when a dog is repeatedly exposed to a certain stimulus but becomes more responsive to it.

For example, if a dog has become desensitised to his trainer giving him the commmand to stop, the trainer could combine the command with a sharp sound, such as a loud rattle. This would surprise him and his reaction to the sound would make him stop.

For example, you give your dog a small serving of broccoli once a week. You let her eat straight out of a special bowl. When you first start using the bowl, she makes no connection between her tasty treat and the bowl. However, over time, she starts to recognise the bowl when you take it out of the cupboard and associates it with the broccoli she loves. She will involuntarily salivate, even though she hasn't seen or smelled the broccoli yet.

This is similar to Pavlov's dogs, who salivated when a bell was rung because they associated the sound with feeding.

Operant conditioning controls voluntary responses, such as teaching a dog to sit. The dog knows that a certain behaviour will result in a desirable response from you. The behaviour is voluntary in order to accomplish the end result.

This type of conditioning uses positive (reward based) and negative (aversive based) techniques which either add or take away a positive or negative stimulus.

Operant conditioning is divided into reinforcement and punishment.

Positive reinforcement is when a dog is rewarded after performing correctly to a given stimulus.

For positive reinforcement to be effective, it's important that the link between the stimulus, behaviour and reward is apparent to the dog.

Negative reinforcement is when a stimulus that the dog finds aversive is removed from his environment.

Positive punishment is the presentation of an undesired consequence when the undesired behaviour is performed, with the object of either reducing or eliminating the behaviour.

The word 'positive' in this sense doesn't mean a good thing, but rather a mathematical term. By performing a positive punishment, you have 'added' something aversive to the dog's environment.

Training in this way is not advised. Often dogs are not able to make the connection between the action and the positive punishment, because the timing is less than perfect.

This is especially true for aggressive or nervous dogs. This type of training may lead the dog to shut down completely (learned helplessness) or end up biting their trainer. Many positive punishment techniques such as electric collars, hitting and yelling will do nothing more than breakdown your dog's trust in you.

Negative punishment is the removal of a stimulus that the dog would see as a reward. By removing the reward each time, the dog behaves in a certain way, you will decrease the chances that the dog will repeat the behaviour.

7 Types of Dog Training Techniques and Their Pros & Cons

* Disclaimer: Please note this is an informative blog post describing common dog training techniques. We are not endorsing the Koehler method.

This method has been tried and tested for decades and is still a popular dog training technique today.

The Kohehler technique uses the positive reinforcement and positive punishment approach. Dick Koehler describes his technique as 'meeting the need for reliable off leash control with time proven techniques that are simple, affordable, and practical to use.'

One of the hallmarks of any serious dog trainer is the adaptation of new information. As in any knowledge-based field, it is absolutely vital to avoid dogmatism. Always keep current.

Dominance-based training utilises various physical actions to exert dominance over the dog when he is seen to be trying to be dominant over the human.  It's based pargely on positive punishment.

The subject of dominance comes up time and time again, because for years it has been thought that dogs are like wolves and are organised hierarchically under one alpha dog who controls the pack. As it turns out, not even wolves have that kind of pack structure.

Dominance-based training is based largely on old research.

Model-rival training is based on the principle that a dog will perform the desired behaviour if there is a human or dog rival who performs the behaviour and seeks attention or reward in return.

This form of dog training is based on patterns of communication and focusses on the interpretation and adjustment between dogs and their trainers.  It's essentially about having a trusting and cooperative relationship with your dog.

As the dog trainer, you need to be able to read your dog's body language, understanding what motivates them, using positive reinforcement to encourage desired behaviours.

Clicker training uses a small metal device that has a button that when pressed produces a 'click' sound.

This is a more precise form of positive reinforcement. When a desired behaviour is performed after a command has been given, the trainer uses the clicker and then follows the sound with a treat. Also known as mark and reward training.

Scientists confirm that this type of training teaches the dog that desired behaviours with be rewarded and that undesirable behaviours gets them nowhere.

No matter the style of training you choose to use, there are three characteristics that will make or break your training sessions.

Timing is everything and should be at the forefront of your mind with any kind of training interaction.  A badly timed reward or punishment sends the dog mixed signals and leads to frustration for both you and your dog.

Why not study a Certificate in Dog Behaviour and Training with Pet Courses.

By submitting this enquiry, I agree to receiving emails from Pet Courses regarding courses that may be of interest to me and I accept the privacy policy. I can unsubscribe at any time. 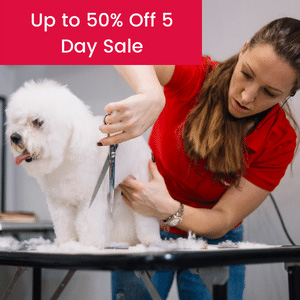